If You Think You Need To Eat Diet Foods To Lose Weight, Read This! 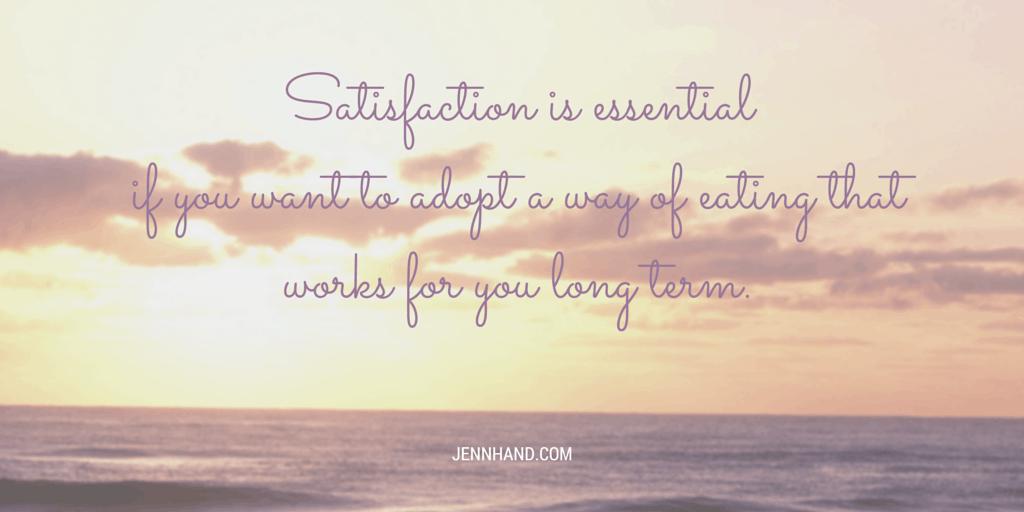 It’s easy to get caught up in thinking that you need to eat diet foods to lose weight (think: sandwich thins, 100 calorie snack packs, fat-free desserts, etc)  We’ve been conditioned to believe we have to eat certain kinds of foods and adhere to specific guidelines in order to achieve the figure we want.

And yes, we fall prey to the info out there on the internet that claims we must eat fat-free yogurt, light breads, low cal  dressing, diet soda, reduced fat cheeses, and anything else that has 1/3 less of this, and fat-free that.

But here’s the thing with those kinds of foods:

Diet foods end up causing you to overeat.

*Insert super scientific case study. (Ok, well just based on my experiences working with clients and analyzing food journals 🙂  Sidenote: I LOVE analyzing client’s food diaries. I could do it for hours!)

Let’s say there are two ladies: Denise and Cathy.

Denise adheres to a strict diet Monday-Friday of some variation of the following:

Denise doesn’t have dessert during the work week. She keeps her diet pretty much the same every day.

And then there’s Cathy.

Her week consists of the following:

She allows herself to indulge every once in a while with an extra snack or dessert that she’s been wanting.

So, here’s where the case study (ok, the made up case study…but still 🙂 ) gets interesting.

If Denise sustains this rigid way of eating (notice I said IF. Because eating this strictly is almost impossible to sustain for any length of time)…come Friday night, she wants a freaking PIZZA with pepperoni, sausage, and the works.  She hasn’t had anything that tastes good all week, so she’s tempted to also order mozzarella sticks and onion rings.

So, she decides that it’s the weekend, and “lets” herself indulge. She has a piece of pizza. And then another. And then a 3rd and 4th are gone. Before ten minutes is over, she’s eaten the entire pizza.

And now she’s crushed. She’s upset that she let herself go, believes she doesn’t have any self-control, and hates what’s she done to herself.

Because she’s “blown it” already, she has a few cookies, the leftover pieces of cake on the counter, and the half melted pieces of chocolate that have been in her purse all week.

Cathy’s Friday night looks a little different. She also indulges in pizza, but stops at her 3rd slice. She doesn’t have dessert because she feels like the pizza was enough. Why? Because she has felt satisfied with the way she’s eaten all week.

She’s allowed herself some flexibility in her diet, given herself permission to have a treat or two during the week, and doesn’t feel the need to “go of” any kind of strict way of eating and have 17 pieces of pizza and cake.

Here’s the reason these two situations turned out so differently:

Because Cathy was SATISFIED with what she ate during the week.

Satisfaction is ESSENTIAL if you want to adopt a way of eating that works for you long term. (Tweet that!)

You absolutely cannot be eating sandwich thins with one piece of turkey, iceberg lettuce salads with chicken and 2 tablespoons of calorie free dressing, and 100 calorie snack packs of Oreo crisps and feel the “ahhhh that was an amazingly, satisfying meal”.

Yes, you may sustain this way of eating for a day, 5 days, a few weeks. But at some point, you’ll cave. You’ll start wanting REAL bread, REAL salads and REAL Oreos.

I know it may seem counter-intuitive.

Because you want to believe that if you can control what you’re putting into your mouth, then you’ll be able to control your weight and your body size.

But sometimes letting go of control, even a little bit, is where you find your freedom. (Tweet that!)

If you’re eating really rigidly, you won’t be satisfied with diet foods for long. Because all of the fat-free, light, low-calorie type of foods do not fill you up the way the real thing does.

When you are satisfied with the foods you’re eating, physically AND mentally, you won’t have cravings and episodes of binging.

Because when you’re adhering to some arbitrary way that you “need/must/should” eat, it will eventually backfire.

I know it’s hard to get out of the “yea but I have to eat XYZ if I want to shed the pounds and look good in a bikini”… BUT, it 1. Isn’t going to last long term and 2. You won’t feel satisfaction.

So, your assignment is to take a look at what you’re eating. Do you feel satisfied with it? Does it taste good? Do you want it? Or do you think you need to eat it? Share your thoughts with me in the comments below. I’d love to hear from you 🙂