You Know Everything About Nutrition. So Why Are You Still Overeating?

You Know Everything About Nutrition. So Why Are You Still Overeating? 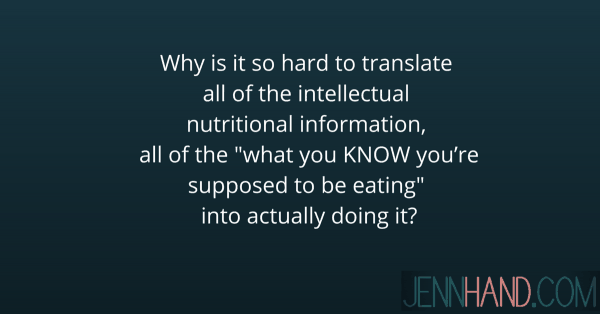 You know the nutritional value of 95% of the things at the supermarket.

You could recite the calories in a slice of pizza, list the things you “should” buy at the grocery store, recount the types of grains for easy digestion, and write out all of the most nutrient dense super-foods.

But despite the fact that you know everything about nutrition and health, it seems you still end up eating all of the stuff you know you “shouldn’t”.

So, why is it so hard to translate all of the intellectual information, all of the “what you KNOW you’re supposed to be doing” into actually doing it?

Let me begin by saying that you aren’t alone. We are a culture of fat-free, gluten-free, everything-free foods. We’re simultaneously obsessed with learning about nutrition/health, while also struggling with our weight (and spending billions of dollars a year trying to keep the weight off!)

Where is the disconnect between knowing what to eat and then making those choices in our day to day lives?

A little backstory: when I began my Masters in Nutrition, I became obsessed with eating only those foods that were the healthiest for my body. I was staying at my parents’ house at the time and a few times a week, I would try out all these off-the-wall, crazy-healthy, made with only the most organic, finest, healthiest ingredients types of recipes.

Much to my parents chagrin, I introduced them to quinoa, amaranth, and agave. For birthdays, I made sweet potato cookies, flourless brownies, and grain-free cakes.  I cut out all refined foods and most animal products. I even swore off white bread, white sugar, and anything that was processed.

Getting an in-depth view of how nutrition affected the body, I became even more aware of what I was “supposed” to eat and because I was a perfectionist, I was going to make sure I ate exactly like that!

That lasted for about 3 months.

Because I began to seriously crave all the things I was denying myself.

I would come home from work compulsively wanting a cheeseburger with the works. And a cinnamon bun. And a tub of icing, 17 pieces of pizza, and everything I hadn’t let myself eat in the past 3 months.

Yes, it’s great to eat healthy and be nutritionally sound…

But, when it’s the MIND that dictates what you should be eating, that’s when it backfires. (tweet that!)

It was my intellectual brain that was telling me what I was supposed to do. My brain said to eat oatmeal for breakfast, vegetables and rice for lunch, and a salad with some nuts sprinkled on top for dinner.

There was a complete disconnect with what my body actually wanted. My body DID want chicken, fish, pasta, and meat. And it sometimes also wanted a cookie, a piece of dark chocolate, or a slice of toast with peanut butter.

Yes, when you are back in balance, you WILL want the “good” foods most of the time.

I DO want to eat salads, fruits, veggies, lean proteins and “healthy” foods. Most of the time.

I also want to have frozen yogurt loaded with Reese’s Cups every once in a while.

During that 3 months, I was restricting. I refused to allow myself ANYTHING that was off my plan. And we all know what happens when you are restricting or dieting…you end up binging. Which is of course, what ended up happening.

So, the solution lies in finding where the disconnect is happening and working to find a balance between what your mind tells you what you want vs what you actually want.

We need to get out of our mind-centered way of living and be more in touch with our bodies.

Because we aren’t feeding our minds.

We are fueling our bodies. And when the mind is in charge, it makes up crazy rules that keep us locked in a rigid diet cycle.

So if you struggle with having a brain filled with nutritional knowledge, and still battling the urge to overeat, ask yourself these 3 questions:

1. Explore what intellectual knowledge you have about what’s healthy.

Do you think that all carbs should be banned from your diet? Do you believe in “good” foods vs. “bad” foods? Do you feel you have to eat lots of salads and grilled chicken to lose weight?

Take a look at what you believe about the way you eat. When you bring your beliefs to light and become aware of what you’re doing around food, that’s the first step to changing those patterns.

2. Are you secretly (or not so secretly) restricting?

Is the way you’re eating satisfying? Do you feel like it’s sustainable? If you are coming from a restricting or dieting mindset, the way you eat won’t be feasible for the long-haul.

If you’re a night-eater or weekend binger, you are most likely restricting at some point during the day/week. Look at your patterns to see where this is happening and where you’re eating only the stuff you “should” eat.

3. Find the happy medium between what’s “healthy” and what’s not.

It’s important to find your balance in the food realm. You need to allow yourself to eat the “bad” things sometimes and have it be okay.  That takes some practice, but giving yourself the permission is half the battle.

I eat healthy about 90(ish)% of the time. I love a grilled vegetables or a big salad with chicken. And I also love animal crackers as a snack, a slice or two of pizza, and some cake at a birthday party.

When you take a look at where the disconnect is happening, it starts to bring some of your patterns to light. Which allows you to begin to bring your way of eating back into balance.