3 Things Never To Say To Yourself Around Food

3 Things Never to Say to Yourself Around Food 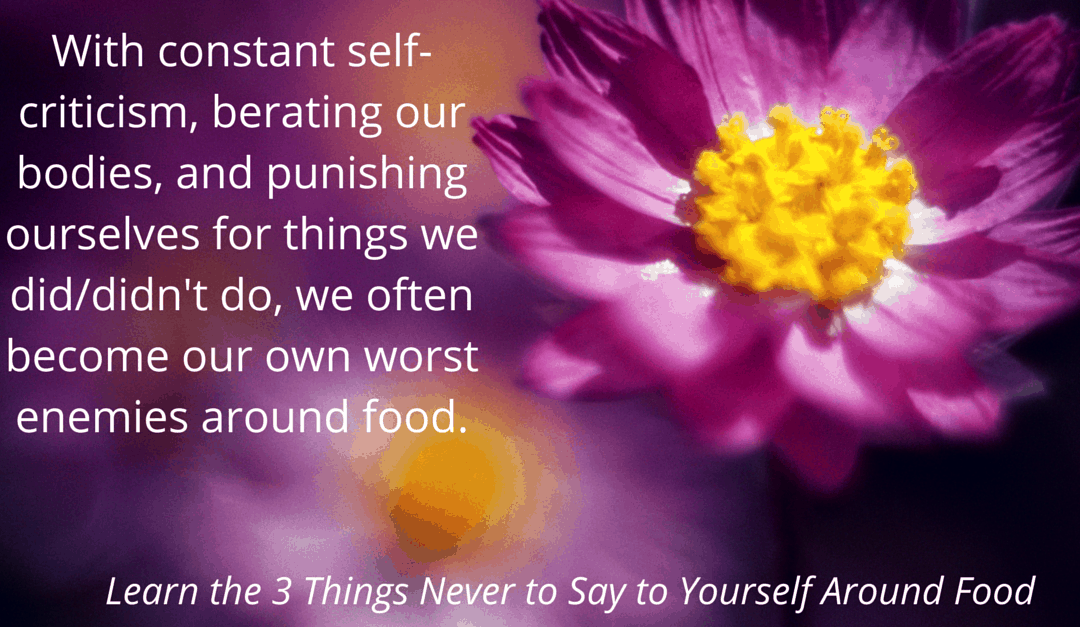 When you’re struggling with food or battling your weight, it’s easy to self-sabotage.  With constant self-criticism, berating our bodies, and punishing ourselves for things we did/didn’t do, we often become our own worst enemies. The things we are telling ourselves (subconsciously or consciously) can do us more harm than good. Here are the 3 things never to say to yourself around food:

I want you to banish this phrase from your vocabulary.

This way of thinking only sets you up for failure. When you have the mindset that you’ve “blown it”, it sets the stage for eating everything you can get your hands on (that’s not on your diet) for the rest of the day/week/month.

When you don’t even entertain the thought that you could potentially “blow it”, you don’t then need to eat everything  in your pantry because it’s not forbidden or restricted.

When you tell yourself you can’t have a piece of cake at your friend’s birthday fiesta, what do you end up thinking about the entire time? The cake, of course.

You fantasize about the cake, imagine just how tasty a smidgen of icing would be, and daydream about the smooth sugary bite on your tongue.

But you immediately refuse to let yourself indulge because you aren’t allowed to eat desserts during the work week!

When you’re all in your head, going back and forth about eating the cake vs. not eating the cake, you are not really even there with your friends or enjoying the meal; you’re having internal battles about how much you want to eat a piece but told yourself you couldn’t.

When you refuse to allow yourself to eat a certain food group (most likely carbs), mandate a no eating dessert after dinner rule, or refuse to indulge in anything that’s not on your strict food plan, at some point, you are going to want everything you told yourself you weren’t allowed to have. Cue a potential binge.

(Note: I often advise clients when they are first starting out to avoid their trigger foods (and not have them in the house). We work on this mindset and work through dealing with trigger foods, so they don’t HAVE to ever have this rule around a certain food)

This is a tricky one. Because, after all of these years of feeling “normal” around food, I still hear myself saying this sometimes! I’ll have a weekend of going  out to eat, eating more desserts than normal,  being lazy and not working out, feeling “eh” about my body, and then Sunday night rolls around.

And then I catch myself. Because if there’s no “wagon” to ever fall off of, then you don’t need to get back on it starting tomorrow.

If you don’t have strict rules and a rigid way of eating, then you won’t NEED to begin again after you ate too much one day. You’ll know it will naturally even out, you’ll trust your body to regulate itself, and you’ll believe that one day or a few days of unhealthy eating isn’t the end of the world.

So, your challenge for this week is to catch yourself when you think or say one of these phrases, and recognize that the first step to change is to become of aware of where you are getting in your own way 🙂

Tell me, do you find yourself saying any of these? Which one can you start to banish from your vocabulary? Share in the comments below.