Should You Cut Out Carbs? 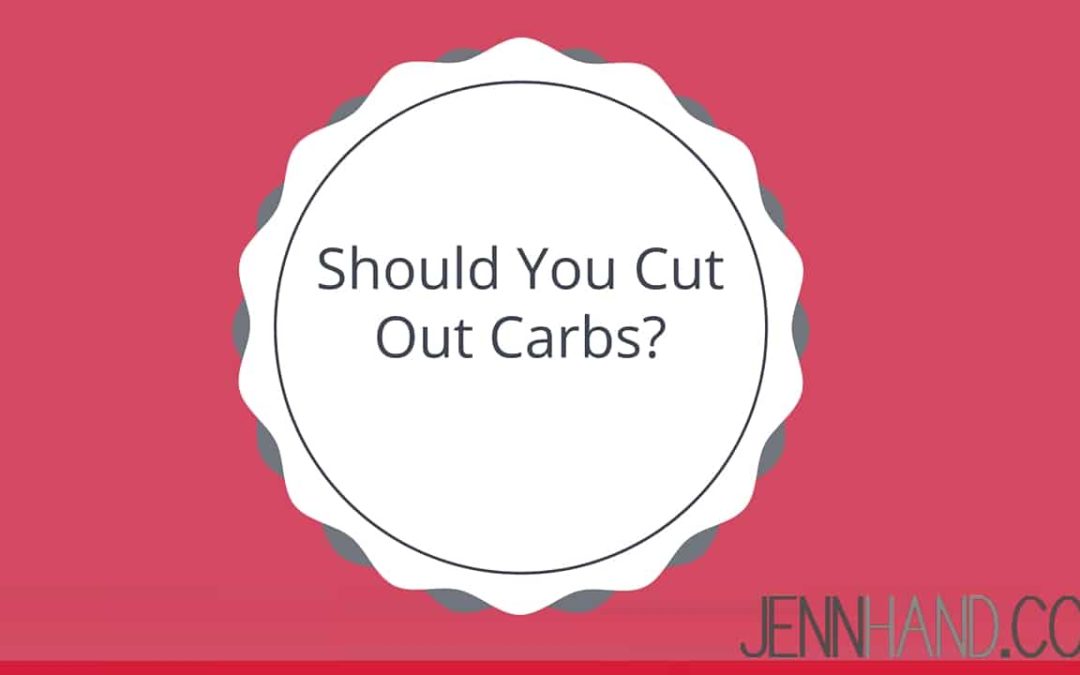 Should you cut out carbs from your diet? Ahhh the million dollar question. (And one I hear all the time from clients.)

Cutting out carbs is something everyone THINKS they need to be doing in order to lose weight.

If you’ve struggled for years battling your weight and food, it can seem that there is a direct correlation between cutting out carbs and weight loss (not to mention we’ve been taught that carbs are “bad”!)

I went to a wedding in Florida this past weekend and two of my close friends were on a “no carb” kick…both trying to lose weight for different reasons.

One of them had lost 6 pounds already. And so it brought up my old tapes…

Should I be doing that?

Do I need to “clean up” my eating?

She’s losing weight, so should I be cutting out carbs?

Of course, I didn’t listen to those voices because I recognized them for what they are: old tapes, old programming and old habits that rear their ugly heads every once in a while.

But when you’re in the throes of the battle of these voices, I know how hard it can be to not listen.

Because cutting out carbs can seem like a magical solution. It somehow feels like it can be an easy fix to a endless battle. It’s that seduction of eating “perfectly”…

But here’s the deal.

When you’ve battled food for half your life, another food rule is not what you need. If you’re anything like I was, you’re desperately trying to break free from the rules you already have, not add another one!

Unless there’s a legit medical reason for you to cut out carbs, your focus should be on finding balance and sanity in your eating. It should NOT be on adding more rules to the mix.

Instead, look at what your aim is BEHIND wanting to cut out carbs.

(If it’s to lose weight, check out my blog post from last week, as it addresses this.)

Is it to be healthier?

That’s a valid reason, but check in with yourself to see where it’s coming from. Is it your mind being sneaky and secretly wanting you to restrict so you can gain control over what you’re eating?

I’ve talked before about the HOW of eating. It’s not necessarily WHAT you’re eating but HOW you’re eating it. If you eat a slice of toast with peanut butter and banana, and loving every single morsel that goes into your mouth, then that is far better then eating a salad with grilled chicken and despising every bite.

Because you know what happens when you spend so much time hating what you’re eating (and wishing you were eating something more delicious)? You end up binging.

It’s the Law of Dieting as I like to call it. For every equal and opposite diet, there’s a binge. When you restrict, you can expect to overeat later (it’s impossible to maintain that restriction and rigidity forever and so you end up swinging to the other extreme)

Are you doing it to “save up” for something? (i.e. “I’ll cut out carbs for 2 weeks so I can save up for when I know I’ll indulge on my family vacation”).

If you end up “saving up” your calories, you know what will happen at the event you’re saving up for? You’ll go balls to the wall and binge eat. It’s the same principle. When you restrict, you’ll want to end up binging.

I know cutting out carbs can seem like an “easy” solution. But, unfortunately, there are no easy solutions if you REALLY want to fix the whole food problem. It’s about more than just the food, and if you only skim the surface, you’ll never bring about lasting change.

So remember when you get tempted to cut out carbs, examine your motives and look at what rules you’re making for yourself. Women who struggle with food typically want to rebel against any rule we do make, so remember that if you cut out carbs completely, you may end up saying “F this” by day 3 because you really wanted that peanut butter toast!

For more inspiration, guidance and support, check out the Food Freedom Bundle!